“Debuting on the New York stage, Zara is unprepared—for Eli, the girl who makes the world glow; for Leopold, the director who wants perfection; and for death in the theater.

Zara Evans has come to the Aurelia Theater, home to the visionary director Leopold Henneman, to play her dream role in Echo and Ariston, the Greek tragedy that taught her everything she knows about love. When the director asks Zara to promise that she will have no outside commitments, no distractions, it’s easy to say yes. But it’s hard not to be distracted when there’s a death at the theater—and then another—especially when Zara doesn’t know if they’re accidents, or murder, or a curse that always comes in threes. It’s hard not to be distracted when assistant lighting director Eli Vasquez, a girl made of tattoos and abrupt laughs and every form of light, looks at Zara. It’s hard not to fall in love. In heart-achingly beautiful prose, Amy Rose Capetta has spun a mystery and a love story into an impossible, inevitable whole—and cast lantern light on two girls, finding each other on a stage set for tragedy.”

This book is goooood. But I don’t know how to describe it?

It’s reminiscent of the feeling of being indoors wrapped in blanket while it’s cold and raining outside. It’s cozy, but in a totally unsettling way.

The writing is lush and gorgeous and Zara is written so perfectly, it’s amazing. You feel her anxieties and the pressure she is under, but also her hope and her embodiment of Echo. Zara and Eli’s relationship is beautifully portrayed. In fact, all of the supporting characters are well done and have thoroughly thought out backstories which influence their actions. I almost wish the book had a prequel to unravel some of their stories further.

But there’s also a murder mystery? And a seedy underbelly to the production of their play that affects each one of the characters. There are a lot of subtleties in that plot that I probably didn’t catch.

This book will definitely leave you with a lot to think about- it’s very timely in its portrayal of how our society idolizes creative genius.

Plus: Beautiful writing, stories within stories, a strong and relatable female lead.

Minus: It’s hard for me to critique much about this one. There are probably plot points that I would have liked to see turn out differently, if I really had to pick something. 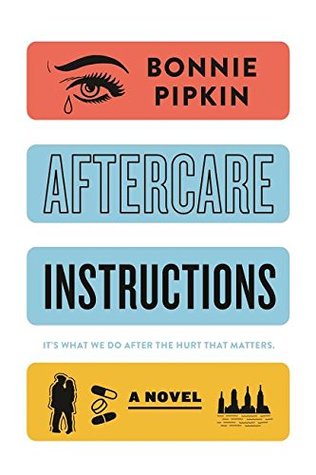 Aftercare Instructions by Bonnie Pipkin- Very different writing styles, but similar in that both main characters go to New York to pursue dreams of acting. Both are great reads.