“Magnus Chase, a once-homeless teen, is a resident of the Hotel Valhalla and one of Odin’s chosen warriors. As the son of Frey, the god of summer, fertility, and health, Magnus isn’t naturally inclined to fighting. But he has strong and steadfast friends, including Hearthstone the elf, Blitzen the dwarf, and Samirah the Valkyrie, and together they have achieved brave deeds, such as defeating Fenris Wolf and battling giants for Thor’s hammer, Mjolnir. Now Magnus and his crew must sail to the farthest borders of Jotunheim and Niflheim in pursuit of Asgard’s greatest threat. Will they succeed in their perilous journey, or is Ragnarok lurking on the horizon?”

I liked this one a lot more. Maybe that’s because I had just come off the last Trials of Apollo book and found this one to be a refreshing palate cleanser.

I felt like there was some actual character growth here and a positive message. Magnus realizes that he may not be the strongest demigod in terms of brute force, but he does possess something quite powerful- the ability to be positive and bring out the best in others.

That’s a really great message, especially in times like these.

And the relationship between Magnus and Alex is really quite ground-breaking in mainstream YA, a male main character who has feelings for a gender fluid person. As much as I might drag Riordan for some of his goofier books (*cough* Apollo *cough*), I really do think he’s doing some great advocacy work through his writing and I applaud him for it.

Plus: The overwhelmingly positive message of this series is why I never give up on Riordan completely.

Minus: Kind of wish Riordan would pick some more interesting mythologies to write about, but I guess that’s what we’ll be getting out of his publishing imprint. 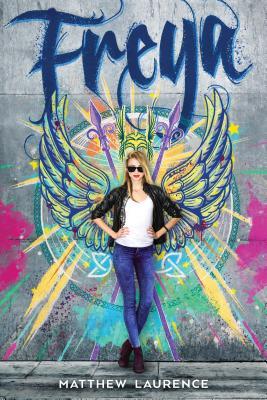 Freya by Matthew Laurence- A fresh take on the “old god in the new world” trope, this time with Freya, goddess of love, war, and death. Since tomorrow is Thanksgiving and since today is MY BIRTHDAY (!!), I’ve decided to treat you all (and myself) to this very special Wednesday review of a short story by one of my favorite authors!

“Petite though she may be, Zuzana is not known for timidity. Her best friend, Karou, calls her “rabid fairy,” her “voodoo eyes” are said to freeze blood, and even her older brother fears her wrath. But when it comes to the simple matter of talking to Mik, or “Violin Boy,” her courage deserts her. Now, enough is enough. Zuzana is determined to make the first move, and she has a fistful of magic and a plan. It’s a wonderfully elaborate treasure hunt of a plan that will take Mik all over Prague on a cold winter’s night before leading him to the treasure: herself! Violin Boy is not going to know what hit him.”

Obviously I loved the heck out of this thing. Laini Taylor is one of my favorite authors and Daughter of Smoke and Bone is my favorite series (tied with Harry Potter of course).

I love the fact that Taylor just released this previously digital story in a physical format! I hadn’t read it until now. And the illustrations are so delightful, especially paired with the fact that they are drawn by her husband (so adorable).

And you don’t necessarily need to have read the companion series before reading this short story. Karou may be one of my favorite characters of all time, but Zuzana is a force of nature all her own.

I have heard rumblings that Taylor is going to write/has already written a short story about the Zuzana/Mik wedding and I am so here for it.

Please, will the Universe deliver that to me as my present??

Plus: Love, puppets, whimsical illustrations. This book has it all!

Minus: That I waited so long to read it.

Daughter of Smoke and Bone by Laini Taylor- What did you expect? XD   Read it now! “Sixteen-year-old Aza never intended to pursue the mystery of fugitive billionaire Russell Pickett, but there’s a hundred-thousand-dollar reward at stake and her Best and Most Fearless Friend, Daisy, is eager to investigate. So together, they navigate the short distance and broad divides that separate them from Russell Pickett’s son, Davis.

Aza is trying. She is trying to be a good daughter, a good friend, a good student, and maybe even a good detective, while also living within the ever-tightening spiral of her own thoughts.”

Turtles all the Way Down feels like a mashup of Paper Towns (there’s a mystery afoot!) and The Fault in Our Stars (enigmatic rich male adult as central figure). It’s not totally unenjoyable, but neither did I find it very intriguing. I will say that the depiction of Aza’s mental illness is very realistic, probably due to the fact that they are based on Green’s own experiences.

And I actually prefer Green’s female narrators. For some reason, his male main characters always come across as whiny and small-minded (based on Looking for Alaska and Paper Towns). His female narrators (from Turtles and The Fault in Our Stars) are just more appealing to me, which is rare for a male author. So well done?

Plus: I think maybe this story could have been improved upon had it been told from the point of view of the tuatara.

Minus: Aza’s relationship with her best friend was very awkward and pretty unhealthy…not really sure how to feel about it yet. 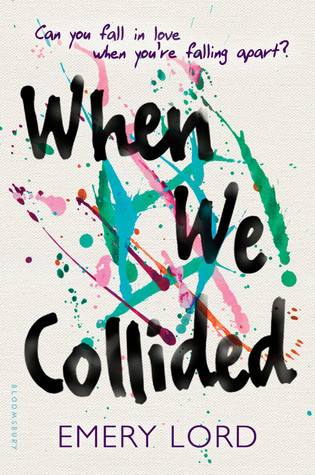 When We Collided by Emery Lord- Both books do a good job portraying the important subject of mental illness. And both authors have a certain flair to their writing. “Mary B. Addison killed a baby.

Allegedly. She didn’t say much in that first interview with detectives, and the media filled in the only blanks that mattered: A white baby had died while under the care of a churchgoing black woman and her nine-year-old daughter. The public convicted Mary and the jury made it official. But did she do it? She wouldn’t say.

Mary survived six years in baby jail before being dumped in a group home. The house isn’t really “home”—no place where you fear for your life can be considered a home. Home is Ted, who she meets on assignment at a nursing home.

There wasn’t a point to setting the record straight before, but now she’s got Ted—and their unborn child—to think about. When the state threatens to take her baby, Mary must find the voice to fight her past. And her fate lies in the hands of the one person she distrusts the most: her Momma. No one knows the real Momma. But who really knows the real Mary?”

Mary is very easy to sympathize with- locked away for murder at only 9 years old, her mother clearly didn’t try to save her or seem to care much about her at all, staying in a group home with some pretty scary girls, terrible adults deciding her fate, and on top of it all, she gets pregnant?

And all she wants to do is take the SATs and go to college! I was rooting for her so badly.

The whole time I thought this plot was pretty straight-forward. It seemed like the author was trying really hard to cast doubt on the story of the baby’s death, but I was pretty convinced that I knew what had really happened. But!!! It turns out I was wrong and I love that! And you don’t truly find out what happened until the very end of the book. So the suspense is killing you right up until that final page!

I will say there were some slow points in the narrative that made me question the book’s length. And there are also a lot of intense situations in terms of violence, both physical and sexual. There were definitely some spots that made me uncomfortable, but I felt that it all served to strengthen the story and make you empathize with Mary.

Plus: Great main character and a fantastic story that will make you question what you really know.

Minus: Some minor slow spots, but overall, it’s awesome!

Monster by Walter Dean Myers- A 16 year old African American boy tells the story of his trial for murder. Like Allegedly, it’ll make you think hard about race and justice. Bronwyn, the brain, is Yale-bound and never breaks a rule.

Addy, the beauty, is the picture-perfect homecoming princess.

Nate, the criminal, is already on probation for dealing.

Cooper, the athlete, is the all-star baseball pitcher.

And Simon, the outcast, is the creator of Bayview High’s notorious gossip app.

Only, Simon never makes it out of that classroom. Before the end of detention Simon’s dead. And according to investigators, his death wasn’t an accident. On Monday, he died. But on Tuesday, he’d planned to post juicy reveals about all four of his high-profile classmates, which makes all four of them suspects in his murder. Or are they the perfect patsies for a killer who’s still on the loose?

Everyone has secrets, right? What really matters is how far you would go to protect them.”

If you’ve read my blog before, then you know I’m not usually a big mystery/thriller fan. But if they were all like One of Us is Lying, I would be their biggest cheerleader!

This is literally The Breakfast Club with a murder investigation, so it’s perfection.

Everyone’s story lines are so good- from Bronwyn’s acceptance of a not so perfect life, to Cooper’s secret double life, to Addy’s search for who she really is, to Nate’s attempts to finally let his guard down. And the supporting cast is just as good- Simon, the gossip monger who dies in detention, his best friend, Janae (what does she/doesn’t she know??), Jake, Addy’s boyfriend, Ashton, Addy’s sister….the list goes on and on!

The romance was a little predictable, but I liked the way the relationship progressed. And I love, love, loved how the friendship between the main four developed.

The characters are great, the writing is well done, and the plot is superbly thought out! I kind of had an inkling about what happened, but was still guessing at the big picture right up until the very end.

Read this now and let’s discuss!

Plus: The mystery, the romance, the feminism…it’s all done so well I can’t believe this is McManus’ first book! Can’t wait to see what she does next.

Minus: If I had to pick something to critique about the book, it would probably be that there’s room for more discussion of racial inequality. 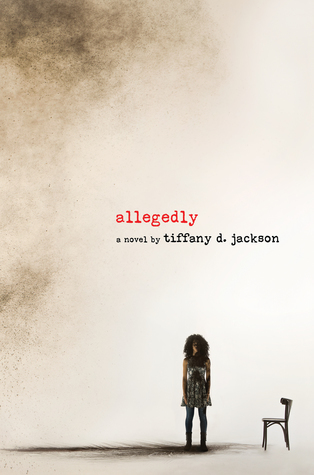 Mary, convicted of killing a baby when she was just a child herself, finds out that she is pregnant and will stop at nothing to protect her unborn child. (Review coming soon to a blog near you!)