“In a shack on the outskirts of the border city of Juarez, a teenage boy is visited by a long-lost friend.

Arturo scrapes together a living working odd jobs and staying out of sight. His friend Faustino has joined one of the city’s violent drug gangs. Now Faustino is in trouble: he’s stolen money from the narcos to smuggle his girlfriend and her baby into the U.S., and he wants Arturo’s help getting it back before they kill him for what he’s done.”

Saint Death is less than 250 pages…but for a short book, it sure packs a big punch!

It covers everything from gang violence to the negative effects of globalization, all while giving us a glimpse of only a single day in the main character’s life. And through it all, the shadow of death follows.

This is a book that constantly involves the reader by asking them hard questions. Sedgwick challenges you to take a hard look at your own beliefs while deftly maintaining the drama of Arturo’s life story. And in less than 300 pages. I’m in awe, if you couldn’t tell.

This book is seriously dark, but it’s an important read. And I think it could be a great fit for some of those reluctant teen male readers out there.

Plus: THAT COVER THO. And the ending is left open to the reader’s interpretation, which I love.

Minus: Parts of the book are pretty overtly political which could be a turnoff to some. But these are pertinent issues, so I think we definitely need to be aware of them. 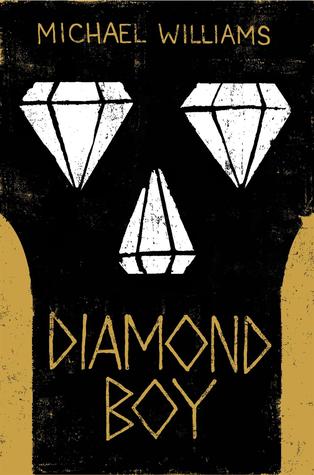 Diamond Boy by Michael Williams- A little bit longer than Saint Death, but a similarly important read about the effects of the diamond industry in Africa.