“Justyce McAllister is top of his class, captain of the debate team, and set for the Ivy League next year—but none of that matters to the police officer who just put him in handcuffs. He is eventually released without charges (or an apology), but the incident has Justyce spooked. Despite leaving his rough neighborhood, he can’t seem to escape the scorn of his former peers or the attitude of his prep school classmates. The only exception: Sarah Jane, Justyce’s gorgeous—and white—debate partner he wishes he didn’t have a thing for.

Struggling to cope with it all, Justyce starts a journal to Dr. Martin Luther King Jr. But do Dr. King’s teachings hold up in the modern world? Justyce isn’t so sure.

Then comes the day Justyce goes driving with his best friend, Manny, windows rolled down, music turned up. Way up. Much to the fury of the white off-duty cop beside them. Words fly. Shots are fired. And Justyce and Manny get caught in the crosshairs. In the media fallout, it’s Justyce who is under attack. The truth of what happened that night—some would kill to know. Justyce is dying to forget.”

First, I would like to thank Random House Children’s for allowing me to read Dear Martin before publication! Baby’s first ARC (advance reader copy, for those of you who may not know the term).

On to the review!

Dear Martin is a strong book in terms of plot and message. But while I was reading, I was constantly wondering if the copy I had was merely a preview edition or if sections were outright missing because the transitions seemed very choppy.

For example, Dr. Martin Luther King Jr. features prominently in the book, yet the main character never really explains why.

Because of my disconnect from the story, I felt a little disconnected from the characters. But the story definitely kept me hooked and I finished in about two hours, that’s how anxious I was to know how it ended.

It does end on a somewhat bleak note, but what I took away from this book is that even changing the minds/outlooks of one or two people can make an impact. And that’s a powerful message.

Plus: If you want to think and you want to ugly cry (which isn’t always a bad thing), this book is for you. And I want to know more about Black Jihad- they sound intense.

Minus: Needs a bit more exposition and detail in some places. 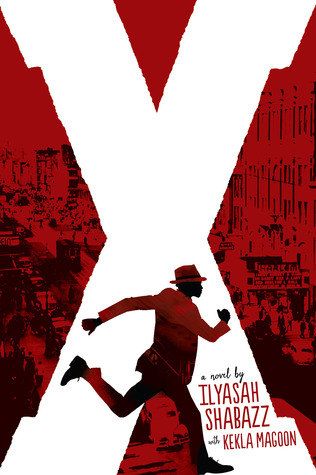 X by Ilyasah Shabazz and Kekla Magoon-  The re-imaged youth of another prominent civil rights activist, Malcom X. And it’s co-written by his own daughter, how awesome!